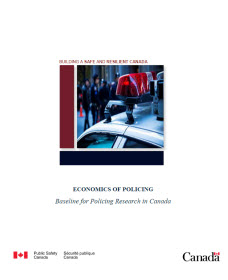 Economics of Policing: Baseline for Policing Research in Canada

The Federal, Provincial and Territorial (FPT) Ministers' approval of Phase I (November 2013) and Phase II (October 2014) of the Economics of Policing and Community Safety Shared Forward Agenda, included a three-pronged plan for policing research in Canada to:

In order to advance the research plan, Public Safety Canada and Simon Fraser University co-hosted the Economics of Policing: National Policing Research Symposium in Vancouver, British Columbia, on March 5 to 7, 2014. The Symposium brought together representatives from the three national police associations, Canadian and international academics, FPT government representatives and other policing partners to discuss policing research in Canada.

The Symposium discussions were organized around the findings from the 2013 report on the state of police research entitled Economics of Policing: Baseline for Policing Research in Canada. The report found that:

To respond to these findings, the organizers worked with participants and designed the governance, structure and mandate for a research network that would identify research priorities for the policing community, improve the capacity to conduct policing research in Canada and identify criteria to create structures to foster collaboration between the police, academics, governments and stakeholders. The Symposium participants also contributed to the design of the Policing and Community Safety Research webpage which was launched in 2015.

As a result of the discussions at the Symposium, the National Policing Research Agenda was developed and outlines key research priorities moving forward.