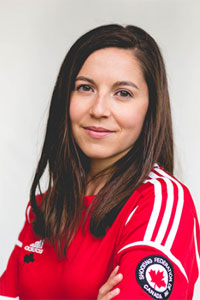 Ms. Lynda Kiejko comes from a shooting family. Her late father Bill Hare competed at the Tokyo 1964, Mexico City 1968, and Munich 1972, Olympic Games. Her sister Dorothy Ludwig became an Olympian at London 2012, after competing at the 2007 and 2011 Pan Am Games.

They competed together at the 2010 and 2014 Commonwealth Games, creating a moment to remember in 2010 when the sisters won bronze in the 10m air pistol pair event.

In addition to these achievements, Ms. Kiejko is also an accomplished professional, having completed her Bachelor of Science in Civil Engineering in 2003, and working as a Senior Civil Engineer in Calgary.