On July 23, 2015, the Canadian Victims Bill of Rights (CVBR) came into force enshrining into law statutory rights for victims of crime to information, protection, participation, and to seek restitution.Footnote1

Under the Victims Bill of Rights Act, a victim of crime may file a complaint if they are of the opinion that their rights have been infringed or denied by a federal department or agency during their interaction with the Canadian criminal justice system.Footnote2

This report compiles standardized information and summarizes aggregate data with respect to the number, nature and resolution of CVBR-related complaints received by Public Safety Canada (PS) and its Portfolio agencies, from April 1, 2018 to March 31, 2019.

PS provides advice and support to the Minister of Public Safety and Emergency Preparedness on legislation and policies governing federal corrections and conditional release and shares some criminal justice responsibilities with the Minister of Justice, including the rights of victims of crime. Below are the PS Portfolio agencies that provide services for which the CVBR must be considered.

The National Office for VictimsFootnote3 (NOV) is a central resource working to improve victims’ experience with the federal corrections and conditional release system by coordinating and engaging with partners and stakeholders, providing a ‘victim lens’ on correctional policy development and developing and disseminating information to help victims better understand and navigate federal corrections and conditional release.

The Correctional Service of Canada’s (CSC) National Victim Services ProgramFootnote4assists victims of federal offenders in registering to receive the information to which they may be entitled, provides registered victims with case-specific information in accordance with the Corrections and Conditional Release Act (CCRA) and advises victims about the opportunity to provide victim statements for consideration in CSC decisions made throughout the management of an offender’s sentence.

The Parole Board of CanadaFootnote5 (PBC) provides registered victims with information about the offender who harmed them in accordance with the Corrections and Conditional Release Act (CCRA). Registered victims can also request to attend hearings, submit and present a victim statement, request special conditions be placed on an offender’s release, request to listen to the audio recording of the hearing, and request written decisions from the PBC’s Decision RegistryFootnote6.

The Royal Canadian Mounted Police (RCMP) provides referralsFootnote7 to Victim Services Programs across Canada, who in turn work to: lessen the impact of crime and trauma on victims and their families and to assist them in their recovery; enhance victim safety and help reduce the risk of further victimization; increase victims’ level of participation in the criminal justice system; and prepare victims acting as witnesses for court proceedings.

The Canada Border Services Agency (CBSA) may come into contact with victims of crime while leading criminal investigations into offences under the Immigration and Refugee Protection Act, at which point, CBSA must consider victims’ rights to information, participation and/or protection, under the CVBR.

Complaint submitted and received
Confirmation of receipt is sent to complainant.

Complaint assessed under the terms of the CVBR
Complaint meets criteria if it meets the definitions and conditions set out in the CVBR and falls under the organization’s responsibility. If information is missing, the victim will be contacted to seek additional information.

In the 2018-2019 fiscal year, a total of 27 complaints were received by PS and its Portfolio agencies with CVBR responsibilities. Of the 27 complaints, 19 were admissible and 8 were deemed inadmissible. (See Table 1).

It is important to note that efforts are made by PS and its Portfolio agencies to address a number of informal CVBR-related inquiries/concerns without a formal complaint being submitted.

*Inadmissible also includes complaints referred to another department or agencyFootnote12. 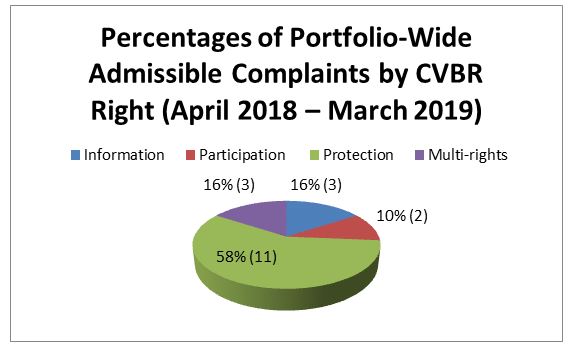 *Inadmissible also includes complaints referred to another department/agency.
**NOV does not categorize complaints as admissible in part.

The complaints received by NOV in 2018-2019 were not related to the CVBR and therefore were inadmissible. One complaint fell under the responsibility of the Department of National Defence while the other was related to a provincial/territorial matter.

NOV made several updates to its complaints webpage to help clarify how victims can make a CVBR-related complaint to the PS Portfolio. Changes to the website include a chart which outlines which CVBR rights each Portfolio organization is responsible for providing to victims of crimeFootnote13.

*Admissible in part includes complaints in which several issues are raised, but only some fall within the jurisdiction of the CSC.

When CSC determines that one or more rights under the CVBR have been infringed, measures are taken at the local, regional and/or national levels to address the presenting issue(s) and to prevent similar infringements:

The partly founded complaint pertained to the right to information. CSC determined that the Case Management team did not incorporate victim information into the offender case preparation in accordance with policy. As a result, incomplete and untimely sharing of information between CSC and PBC led to the victim receiving contradictory information. In this case, where the complaint was deemed partly founded, measures taken at the local level were deemed satisfactory to appropriately address the issue.

One complaint concerning the Right to Protection and the Right to Participation was withdrawnwhen CSC resolved the issue to the victim’s satisfaction before sending its final response. The victim had disagreed with the facility in which the offender was placed following revocation of a conditional release. When CSC clarified that a Regional Treatment Centre is a correctional institution and explained its security level, the victim no longer had concerns about CSC’s decision.

Inadmissible Complaints
CSC determined that 5 complaints were inadmissible. Of these complaints, one fell exclusively under the PBC’s jurisdiction; another did not involve an offender under federal sentence or information sharing within CSC’s responsibility and finally, three others did not meet the definition of a victim of crime under the CVBR.

No changes were made to CSC’s CVBR complaints resolution process.

*Inadmissible also includes complaints referred to another department/agency.
**PBC does not categorize complaints as admissible in part.
***Partly founded refers to cases where not all issues identified in the complaint are considered founded.

Admissible Complaints
Of the 6 admissible complaints, one was founded, one was partly founded and one was withdrawn. The remaining 3 complaints were deemed unfounded when it was determined that PBC acted in accordance with internal policy and law.

The single founded complaint, related to a victim’s Right to Protection, centred on the disclosure of the victim’s married name to the offender without her consent. In response to this privacy breach, training was provided to relevant regional staff.

One complaint, concerning the Right to Participation, was partly founded. The victim expressed concern regarding conflicting information received from a Regional Communications Officer (RCO) about whether a recording of their victim statement could be submitted for the offender’s paper review. In response, the correct process was explained to the victim and an Information Communiqué distributed to clarify the legislation and policy pertaining to a victim’s right to present victim statements when a hearing is not being conducted.

The withdrawn complaint alleging infringements on the Right to Protection and the Right to Participation pertained to the victim’s concerns about the removal of an offender’s special conditions, as well as their treatment at, and placement in, a CSC Regional Treatment Centre.

Inadmissible Complaints
One complaint was submitted by a family member of a federal offender who expressed concerns about the media’s portrayal of the offender’s parole hearing. The complainant was not a victim, and the issue raised did not fall under the CVBR, therefore the complaint was deemed inadmissible.

Four years after the coming into force of the CVBR, there continues to be a small number of CVBR-related complaints across the PS Portfolio. It is important to note that in 2018-2019, there were approximately 23,000 offenders under federal supervision and 8,480 victims registered with the federal correctional system. In this context, the number of victim complaints submitted to the PS Portfolio is very low. This may suggest that victims might not know they have a right to file a complaint. Furthermore, PS and its Portfolio agencies make every effort to address victims’ concerns without a formal complaint being submitted.

PS and its Portfolio agencies with responsibilities under the CVBR will continue to work in partnership to raise awareness about victims’ rights under the CVBR and their right to file a complaint if they believe these rights have been infringed or denied. Looking ahead, work continues to streamline the provision of information for victims across the PS Portfolio in order to better meet the needs of victims of crime.

Victims of crime have the:

Public Safety Canada (PS) – was created in 2003 to ensure coordination across all federal departments and agencies responsible for national security and the safety of Canadians.

Corrections and Conditional Release Act (CCRA) – the legislation that governs the corrections and parole system in Canada. The CCRA outlines the responsibilities and authorities of Correctional Service of Canada, the Parole Board of Canada and the Office of the Correctional Investigator.

Correctional Service of Canada (CSC) - is the federal government agency responsible for administering sentences of a custodial term of two years or more, as imposed by the courts. CSC is responsible for managing institutions of various security levels and supervising offenders under conditional release in the community.

National Office for Victims (NOV) – a central resource, located at PS, working to improve victims’ experience with the federal corrections and conditional release system by coordinating and engaging with partners and stakeholders, providing a ‘victim lens’ on correctional policy development and developing and disseminating information to help victims better understand and navigate federal corrections and conditional release.

Parole Board of Canada (PBC) – is an independent administrative tribunal that, as part of the Canadian criminal justice system, makes quality conditional release and record suspension decisions, can order expungement of a conviction and makes clemency recommendations.

Victim of crime - an individual is considered a victim of crime if they have suffered physical or emotional harm, property damage or economic loss as the result of the commission of an offence.

PBC Regional Communications Officers (RCOs) – provide services to registered victims in each of PBCs regional offices across Canada. RCOs assist victims in accessing and understanding the parole process and answer questions or address concerns victims may have.