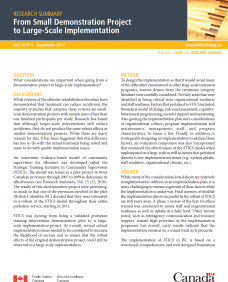 What considerations are important when going from a demonstration project to large-scale implementation?

While reviews of the offender rehabilitation literature have demonstrated that treatment can reduce recidivism, the majority of studies that comprise these reviews are small-scale demonstration projects with sample sizes of less than one hundred participants per study. Research has found that although larger-scale interventions still reduce recidivism, they do not produce the same robust effects as smaller demonstration projects. While there are many reasons for this, it has been suggested that this difference has less to do with the actual treatment being tested and more to do with quality implementation issues.

An innovative evidence-based model of community supervision for offenders was developed called the Strategic Training Initiative in Community Supervision (STICS). The model was tested as a pilot project in three Canadian provinces through 2007 to 2009 to determine its effectiveness (see Research Summary, Vol. 15 (3), 2010). The results of this demonstration project were promising, so much so that one of the provinces involved in the pilot (British Columbia; BC) decided that they were interested in a rollout of the STICS model throughout their entire probation service, starting in 2011.

To design the implementation so that it would avoid many of the difficulties encountered in other large-scale treatment programs, lessons drawn from the treatment integrity literature were carefully considered. Two key areas that were identified as being critical were organizational readiness and staff readiness. Factors that pertained to STICS included: theoretical model of change, risk-need assessment, cognitive-behavioural programming, resource support and monitoring. Also guiding the implementation plan were considerations of organizational culture, program implementation and maintenance, management, staff, and program characteristics, to name a few. Finally, in addition to strategically designing an implementation to address these factors, an evaluation component was also incorporated that examined the effectiveness of the STICS model when implemented on a large-scale as well as factors that pertained directly to key implementation issues (e.g., system uptake, staff readiness, organizational climate, etc.).

While many of the considerations listed above are relatively straightforward to address in an implementation plan, it is more challenging to remain cognizant of these factors while the implementation is under way. Final answers of whether the implementation plan is successful in the rollout of STICS are still years away. A phase 1 review of the first 10 offices trained was conducted to assess staff and organizational readiness as well as uptake at a field level. Other factors noted, such as interagency communication and resource support, remain high priorities as the implementation progresses but overall, early results indicate that the implementation remains on a sound track as it proceeds.

The implementation of STICS in BC is based on a structured, comprehensive, and well-designed foundation around adherence to the principles of effective offender rehabilitation (see Research Summary Vol. 12 (6), 2007). As such, this evidence-based community supervision project will no doubt continue to inform how best to move from a successful demonstration project to large-scale implementation while ensuring effective system uptake, as well as implementation integrity and fidelity.