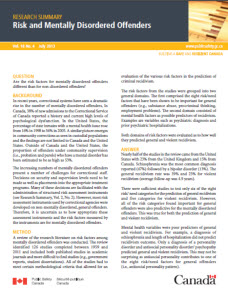 In recent years, correctional systems have seen a dramatic rise in the number of mentally disordered offenders, in Canada, 38% of new admissions to the Correctional Service of Canada reported a history and current high levels of psychological dysfunction. In the United States, the percentage of state inmates with a mental health issue rose from 16% in 1998 to 56% in 2005. A similar picture emerges in community corrections as seen in custodial populations and the findings are not limited to Canada and the United States. Outside of Canada and the United States, the proportion of offenders under community supervision (i.e., probation and parole) who have a mental disorder has been estimated to be as high as 53%.

A review of the research literature on risk factors among mentally disordered offenders was conducted. The review identified 126 studies completed between 1959 and 2011 and included both published studies in academic journals and more difficult to find studies (e.g., government reports, student dissertations). All of the studies had to meet certain methodological criteria that allowed for an evaluation of the various risk factors in the prediction of criminal recidivism.

The risk factors from the studies were grouped into two general domains. The first comprised the eight risk/need factors that have been shown to be important for general offenders (e.g., substance abuse, procriminal thinking, employment problems). The second domain consisted of mental health factors as possible predictors of recidivism. Examples are variables such as psychiatric diagnosis and prior psychiatric hospitalizations.

Both domains of risk factors were evaluated as to how well they predicted general and violent recidivism.

Nearly half of the studies in the review came from the United States with 23% from the United Kingdom and 15% from Canada. Schizophrenia was the most common diagnosis reported (47%) followed by a bipolar disorder (13%). The general recidivism rate was 39% and 23% for violent recidivism (average follow-up was 4.9 years).