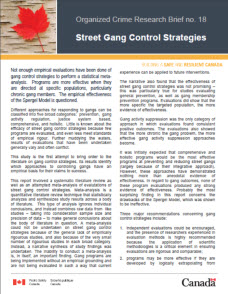 Not enough empirical evaluations have been done of gang control strategies to perform a statistical meta-analysis.  Programs are more effective when they are directed at specific populations, particularly chronic gang members. The empirical effectiveness of the Spergel Model is questioned.

Different approaches for responding to gangs can be classified into five broad categories: prevention, gang activity regulation, justice system based, comprehensive, and holistic. Little is known about the efficacy of street gang control strategies because few programs are evaluated, and even less meet standards of empirical rigour. Further muddying the waters, results of evaluations that have been undertaken generally vary and often conflict.

This study is the first attempt to bring order to the literature on gang control strategies. Its results identify which approaches to controlling gangs have an empirical basis for their claims to success.

This report involved a systematic literature review as well as an attempted meta-analysis of evalutations of street gang control strategies. Meta-analysis is a quantitative literature review technique that statistically analyzes and synthesizes study results across a body of literature. This type of analysis ignores individual conclusions, and instead combines raw data from like studies – taking into consideration sample size and precision of data – to make general conclusions about the body of literature in question. A meta-analysis could not be undertaken on street gang control strategies because of the general lack of empirically rigourous studies, and also because of the very small number of rigourous studies in each broad category. Instead, a narrative synthesis of study findings was undertaken. The inability to conduct a meta-analysis is, in itself, an important finding. Gang programs are being implemented without an empirical grounding and are not being evaluated in such a way that current experience can be applied to future interventions.

The narrative also found that the effectiveness of street gang control strategies was not promising – this was particularly true for studies evaluating general prevention, as well as gang membership prevention programs. Evaluations did show that the more specific the targeted population, the more evidence of effectiveness.

It was initially expected that comprehensive and holistic programs would be the most effective programs at preventing and reducing street gangs (largely because of their integrative approach). However, these approaches have demonstrated nothing more than anecdotal evidence of effectiveness. In regard to gang outcomes, none of these program evaluations produced any strong evidence of effectiveness. Probably the most surprising finding in this report concerns the drawbacks of the Spergel Model, which was shown to be ineffective.