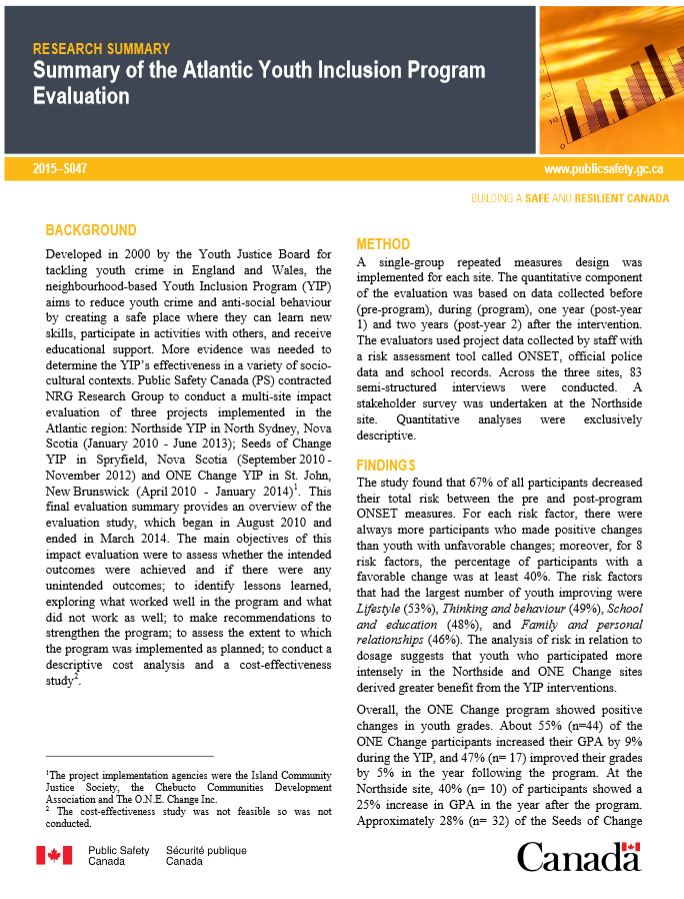 Developed in 2000 by the Youth Justice Board for tackling youth crime in England and Wales, the neighbourhood-based Youth Inclusion Program (YIP) aims to reduce youth crime and anti-social behaviour by creating a safe place where they can learn new skills, participate in activities with others, and receive educational support. More evidence was needed to determine the YIP’s effectiveness in a variety of socio-cultural contexts. Public Safety Canada (PS) contracted NRG Research Group to conduct a multi-site impact evaluation of three projects implemented in the Atlantic region: Northside YIP in North Sydney, Nova Scotia (January 2010 - June 2013); Seeds of Change YIP in Spryfield, Nova Scotia (September 2010 - November 2012) and ONE Change YIP in St. John, New Brunswick (April 2010 - January 2014)Footnote1. This final evaluation summary provides an overview of the evaluation study which began in August 2010 and ended in March 2014. The main objectives of this impact evaluation were to assess whether the intended outcomes were achieved and if there were any unintended outcomes; to identify lessons learned, exploring what worked well in the program and what did not work as well; to make recommendations to strengthen the program; to assess the extent to which the program was implemented as planned; to conduct a descriptive cost analysis and a cost-effectiveness studyFootnote2.

A single-group repeated measures design was implemented for each site. The quantitative component of the evaluation was based on data collected before (pre-program), during (program), one year (post-year 1) and two years (post-year 2) after the intervention. The evaluators used project data collected by staff with a risk assessment tool called ONSET, official police data and school records. Across the three sites, 83 semi-structured interviews were conducted. A stakeholder survey was undertaken at the Northside site. Quantitative analyses were exclusively descriptive.

The study found that 67% of all participants decreased their total risk between the pre and post-program ONSET measures. For each risk factor, there were always more participants who made positive changes than youth with unfavorable changes; moreover, for 8 risk factors, the percentage of participants with a favorable change was at least 40%. The risk factors that had the largest number of youth improving were Lifestyle (53%), Thinking and behaviour (49%), School and education (48%), and Family and personal relationships (46%). The analysis of risk in relation to dosage suggests that youth who participated more intensely in the Northside and ONE Change sites derived greater benefit from the YIP interventions.

Overall, the ONE Change program showed positive changes in youth grades. About 55% (n=44) of the ONE Change participants increased their GPA by 9% during the YIP, and 47% (n= 17) improved their grades by 5% in the year following the program. At the Northside site, 40% (n= 10) of participants showed a 25% increase in GPA in the year after the program. Approximately 28% (n= 32) of the Seeds of Change participants improved their GPA by 12% one year after the YIP. Across all sites and all comparison periods, at least one quarter (27%) of the youth reduced their absenteeism from the start and end of the comparison period. Attendance was higher for those in the high dosage group compared to those in the low dosage group at the Northside and ONE Change sites. For all three sites, frequency and length of suspensions increased from the program year to the year following the YIP although there were some youth with decreases in frequency of suspensions.

According to police records, the percentage of youth with a decrease in the number of times they were suspected to be involved in criminal incidents and charged (or not) by the police (suspected/charged contacts)Footnote3 was always equal to or higher than the proportion of youth with an increase at the Seeds of Change site. In this site, 50% of participants saw a decrease two years after the YIP. At the Northside site, positive outcomes were delayed to the year after the YIP (60% youth had a decrease). The ONE Change YIP saw a general increase in suspected/charged police contacts; that is, 63% of youth faced an increase in suspected/charged police contacts one year after their participation in the program. The Northside and the ONE Change youth who engaged with the YIP had fewer contacts and suspected/charged contacts per youth across all periods of measurement than those who did not engage to the same extent. The average number of suspected/charged incidents per youth was also analyzed, showing a reduction of criminal offending in the Northside and Seeds of Change sites between the pre-program year and the 2-year post-program periods. It should be noted that the average number of contacts per youth was lower during the YIP than before in Seeds of Change as well as ONE Change.

Eight of the 25 businesses (32%) who completed a Stakeholders Survey in 2013 did not experience any incidents of the types listed. When a similar survey was conducted in 2010, all the businesses reported experiencing some type of incident. According to the results of the survey conducted in 2013, there were not as many youth hanging around with nothing to do during the YIP compared to before the YIP. Eighty-six percent of the businesses who were aware of the YIP felt that the program was somewhat or entirely responsible for decreasing the amount of youth antisocial activity in the area.

Progress made regarding short-term outcomes, school related indicators and criminal offending confirmed the utility of this program.


For more information on research at the Community Safety and Countering Crime Branch, Public Safety Canada, to get a copy of the full research report, or to be placed on our distribution list, please contact:
Research Division, Public Safety Canada
340 Laurier Avenue West
Ottawa, Ontario, K1A 0P8
PS.CPBResearch-RechercheSPC.SP@ps-sp.gc.ca