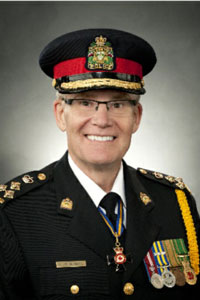 Clive Weighill is a veteran of policing in Saskatchewan, sworn to the office of Chief of Police for the Saskatoon Police Service on September 1, 2006.

During his career with the Regina Police Service, prior to joining the Saskatoon Police Service, he worked in Patrol, Communications, Crime Prevention, Commercial Crime, Property Crime, Drugs, Vice, Planning and Research and Senior Administration.

Chief Weighill holds certificates in Administration and in Continuing Education/ Administrative Development from the University of Regina.  He has attended Executive courses at the Canadian Police College, the Banff School of Management and has graduated from the Senior Management Institute for Police held in Boston and sponsored by the Police Executive Research Forum in the United States.