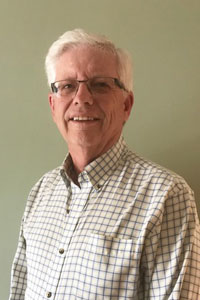 Mr. James Ernest Couch currently resides in the rural municipality of Corman Park, Saskatchewan, a few miles from Saskatoon. He was born on small farm at Lucky Lake, Saskatchewan, and grew up in the rural landscape, which set the stage for his passions in life. He attended school in Lucky Lake, and then the Palliser Institute in Moose Jaw, Saskatchewan. He is married with two children and one granddaughter.

Except for a brief period at Inco Mine in Northern Manitoba, Mr. Couch has spent his entire career with Potash Corporation of Saskatchewan. He started in the mine engineering group at Cory Division in 1973 and retired in 2012 as General Manager of Patience Lake Division.

Mr. Couch has been actively involved in a number of sports over the years. He was a competitive curler for many years and has been a member of several gun clubs. He enjoys the shooting sports of Trap, Skeet, and Sporting Clays.

The competitive retrieving dog world is a big part of Mr. Couch’s life. Both Mr. Couch and his wife compete in the Field Trial and Hunt Test world with their Labrador Retrievers.

As result of growing up in rural Saskatchewan Mr. Couch has a strong connection to the outdoor landscape.  He is an enthusiastic fisherman and bird hunter, pursuing both waterfowl and upland game with his dogs.

As a committed conservationist he has supported several conservation groups over the years. He currently holds the volunteer position of President of Ducks Unlimited Canada. His term ends in June of 2017.